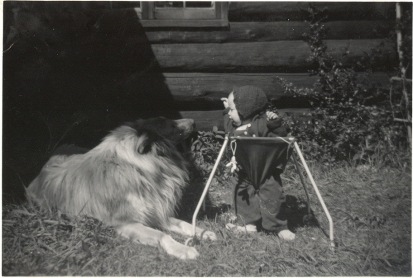 Nestled in the grey waters between Seattle and Olympia, Washington, on a small island in Puget Sound, my family’s two-room log cabin sat surrounded by sky-touching firs. The loving home where my life began.

I was the first child welcomed into an extended family that included independent Great-Grandma Winnie and her goats, two sets of grandparents, and aunts and uncles, both biological and island friends of my parents. They celebrated holidays, birthdays and ordinary reasons to gather and feast. My center-stage-universe included a blind collie who survived falling down an abandoned well.

For a few years, we moved to the city of Tacoma for my dad’s work with a concrete, sand and gravel company. When I was five, my family (now including two younger sisters) returned to the island. We settled into an older, two-story wooden house (with a basement for enthusiastic musical productions) on the beach at the bottom of a steep driveway. When I was a teenager, my dad built us a new home next door, and we grew on that beach for over 15 years.

The rhythm of soft waves stirring the pebbly beach outside my window put me to sleep at night. And gull cries over dead discoveries at low tide or alerts to schools of fish announced my day. Smooth barked Madrona trunks grew horizontally from the tree- and bush-covered hill that towered behind the house. Across the water, the exiting sun washed the sky in hues of orangy pink and blue most nights, lighting the evening clouds.

Our companion animals brought additional affection to our lives. At the beginning, we shared our home with a wiry-haired, scruffy dog named Rusty and Twinkle, an independent black cat.

Rusty was a terrier mix, about 35 pounds, with streaks of light red through her oatmeal fur. She joined our family when we lived in the city, and became a perfect beach dog when we returned to the island. Rusty was a sunny dog, just right for a family of three, young adventurous girls. I don’t recall how she broke her hip, maybe slipping from a wet log at high tide, but I still wince remembering her slow recovery, with family crowded around her confining rehab space in the living room.

Rusty didn’t let her injury slow her down, and at least once she reinjured herself exposing the pin in her hip, its silver head like the top of a rounded nail. Her determined run included a limp that developed into an increasingly raised leg as she aged. I don’t remember how she died, but I do remember her steady love and her wiry fur beneath my fingers.

Twinkle, our sleek black female cat with a fuzzy white star on her chest, would leave for a few weeks or months and then return to her “castle” and continue to rule. Never very friendly, she regally tolerated us as long as we fed and adored her.

This was in the days before spay and neuter programs became common practice. The only litter of kittens I remember Twinkle having produced her son, Lightning, who grew into a big, black domestic short hair with the maternal faded star on his chest and a tail that ended in a zig-zag.

Lightning was a homebody and much more affectionate than his wandering mother. He followed us around like a dog, joined us for naps and developed a curious habit that often startled visitors. He would silently leap up from behind, land carefully and drape his body across warm shoulders. We tried to balance his purring weight while continuing with whatever project we were doing, washing dishes, vacuuming or homework. It never occurred to me to make him get off his preferred perch. This was his choice, and I always felt special when he picked me.

Lightning lived a fairly long life until one day when he began and sustained a pained cry. We took him to the veterinarian who explained that he had a hernia, and Lightning returned home with an uncertain prognosis. Later that year, I came home from school to discover that Lightning’s pain had become too great and he had died. I don’t recall specific details about his death, but I think it took place in a veterinarian’s office.

I was in shock and my heart broke without his steady affection. Lightning had been a constant companion with his hearty meow and tail held high, the “broken” tip gently waving hello with each step. Our chores were quiet without the wrapped comfort of his purring.

Even though Lightning may have died at the vet’s office, living on a small and fairly unpopulated island meant my tender-hearted dad usually took on the task of ending our pets’ suffering. Our family never talked about this obligation, this necessity. I don’t recall any specifics about what methods he used. I later realized how this burden was always a part of any new animal joining the family brought home by the rest of us.

My dad’s parents, Grandma Dot and Grandpa Charlie, lived with and loved animals, too. Dot was a tall, slender and friendly woman who ran the tiny post office, a vital hub of island news. When she learned that a domestic island animal was being mistreated or neglected, she figured out ways to protect them. She once persuaded a family to hand over their hungry horses to her until they could afford to feed them again.

Grandpa Charlie was a recovering alcoholic with a weak heart, and his companion animals gave him a purpose to survive. Over the years, he and Dot shared their home with a Chihauhau, a parakeet and a cat or two, in addition to at least one horse at all times. I can still remember Grandpa leaving family events early saying he needed to get home and feed the animals. I recognize that behavior now. 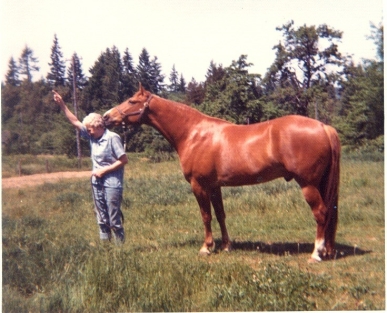 Grandma Dot’s passion was horses. She grew up in Missouri on a horse ranch, rode a horse to school in Colorado and knew how to harness race, sitting in a two-wheeled cart as her horse maintained a fast-paced trot. Her daughter, my aunt Jody, loved horses, too, and I treasured the figurines she gave me for my collection.

During elementary school recess games with other horse-crazy girls, we would whinny and gallop across the field and through tree-lined trails. When I was in the fifth grade, a family friend delighted my sisters and I by offering riding lessons on her spotted, swayback, retired pack horse, Dixie.

Dixie was a sweet and dependable mare, with one brown and one blue eye. She loved our attention, especially when we brushed her coat and de-tangled her long black mane and tail. We learned what to feed her, what treats she liked and how to put her bridle on for walks around her pasture. Soon we were taking turns riding bareback in that pasture while her owner led Dixie with a rope. One of our hands gripped her black mane while the other held the reins to her bridle. Her hefty body rocked from side to side, solid steps carrying our thrill.

That Christmas, Dot and Charlie sat with us around the decorated tree in our living room, discarded wrapping and boxes at our feet. As was typical, my sisters and I woke up early taking whispered steps downstairs to the fireplace, permitted to quietly retrieve our hanging stockings. We rushed back to one of our bedrooms to sit on the bed, pour out the contents, eat fudge and wait until my parents gradually appeared in bathrobes and sleepy faces. Then we could release our muffled excitement and tumble downstairs again.

We girls grudgingly ate a quick breakfast and couldn’t imagine why it took our grandparents so long to show up. No presents could be opened until they arrived. Once there, with coats finally removed and coffee cups in hand, the adults sat back on couch and chairs to watch each child take turns opening their gifts from Santa. Wearily satisfied after all of the presents were revealed and exclaimed over, we girls began to take a longer look at what we had been gifted.

That morning, Dad spoke up and said, “Wendy, you might want to check that box behind the tree.” Curious, I crawled over and reached underneath the branches until my hands found a medium-sized package, about the size of a shoe box. I removed the ribbon without breaking it and slipped my fingers underneath each taped spot to release the wrapping. I lifted open the flaps of the box and looked inside.

My memory from that moment is framed in happiness as I gazed on the worn brown horse bridle folded inside. Everything else in the room faded. A bridle. Of my very own. I was complete.

I finally heard my dad saying something and looked up. “Do you recognize the bridle?” he asked. Well, it looked a lot like Dixie’s.

Yes. It was Dixie’s.

And then he said, “Dixie is now our horse.”

Kaboom. My heart exploded with joy. Content with the gift of a bridle, my brain was stunned trying to imagine that a horse came with it. A horse that we loved.

Dixie needed more care than a dog or a cat, and we made time to feed her, brush the mud off her back and legs from rolling in her pasture and learn how to safely lift and clean the bottom of her big, black hooves.

She taught us to leap off her back after short swims in the chilly Puget Sound waters. The moment she stepped dripping onto the beach, her head would lower and with tucked shoulder, she would began to roll on the graveled stones. Eventually, all four legs would rock her hefty body until itch scratched just right, at a much slower speed, she climbed back to standing, shaking grit and seaweed onto anyone nearby.

Several years later, when Dad and I found our dear Dixie lying dead in her pasture, was the first time I saw him weep. As he stood there sobbing, I felt an innate urge to be the strong one and not cry. Dad’s generous heart for people and animals was reflected when he taught me how build a secure fence for our pasture, patiently helped me learn to shingle the roof of our small barn and reminded me of my responsibilities to leave our toasty home during winter freezes and drive to the barn to chip away at the icy water trough.

That day in the pasture, witnessing the stillness of our beloved spotted Dixie, I watched his coat of strength slip to the ground, the one he wore to shield his family from grief. I bent and reached for the weighted bundle, then stood shifting to put my not-quite-Dad arms through the sleeves. Without hesitation. Without doubt. This time I would bear it for him. 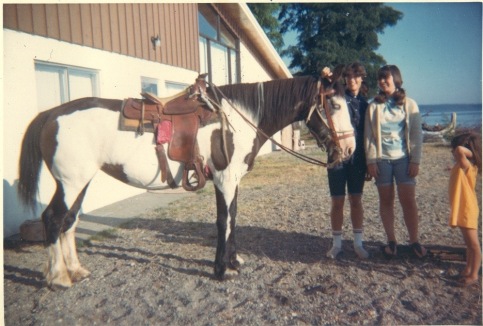