Missing our dear Ramses and his presence in our lives and home, we learned of an adult, red male Doberman in our neighborhood. A young woman was going through a divorce and was brokenheartedly looking for a new home for her special boy.  We visited her and her mother and eagerly welcomed Saber into our hearts.

Sociable, cat-friendly and eager to greet each day, Saber settled easily into his new life. He became my volunteer partner with the Bellevue Humane Society, and we visited elementary classrooms, libraries and bookstores to help children learn how to safely meet a dog.

When Saber and I entered a room, you could hear a collective inhale as the children watched his alert eyes and ears scan the audience. Environmental sweep completed, he would stretch out on his side to nap and the children exhaled filling the room with chatter. Saber’s favorite part was the line of kids at the end of each presentation waiting to meet him and practice new greeting skills.

Saber was a full-speed ahead dog, charging into each day and heart he met. One of his thrills was chasing birds, especially at the ocean. Let loose at the beach, he galloped along the shore and often chased gulls through breaking waves. A small brown speeding speck, he would circle back my way clearing birds from the high tide, dry sand before dashing back toward the surf. I would time one of his running loops to intercept and leash my overjoyed, foam-mouthed speed demon just this side of collapse. 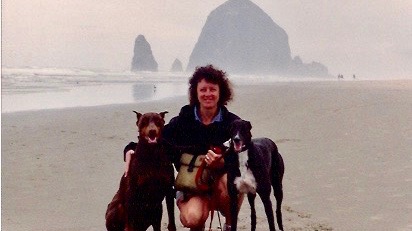 I divorced in my 40’s and moved into my own house, a cottage on two city lots with romping space for dogs. At the entrance to the mini-orchard there was a hand-painted sign that read “Rosehedge.” In addition to Saber, I lived with Cleo and Mason, two retired greyhounds, Surrey and two sister cats, Angel and Tiger. It was Home.

Saber was a social butterfly, as host or attendee. He was loved and, in return, he generously poured it on. During warmer days at Rosehedge, Saber sprawled in the sun on the low deck between house and yard, near enough to find a lap when needed.

Too soon, he was diagnosed with cardiomyopathy. I learned about medication that temporarily reduced the fluid in his lungs and helped him breathe easier. I started to manage his physical exuberance. but his love of life and people never diminished as his disease progressed.

Saber joined me on a weekend road trip with girl friends and we traveled to join a larger group at the Oregon coast. We stopped frequently for his pee breaks, a result of the fluid-reducing meds, and helped him climb back into my van to resume our journey. At the rented beach house, Saber was surrounded by his female fan club with their joyful-sad hearts. He rested while we unpacked and caught up, prepped meals and drinks and filled the space with hugs and laughter.

Some of us walked to the beach matching Saber’s slow pace. I wanted him to have some last sniffs of salty, wave-borne aerosol. I found a soft, dry spot for him next to a log and we settled down to watch the bird channel. His nose gathered the scents on the wind, waves wet the sand and clouds swam the sky. I wondered if he missed his carefree bird-chasing days. Mindful of keeping him warm, we helped Saber to his feet and ambled back to the busy kitchen and growing pile of stories. 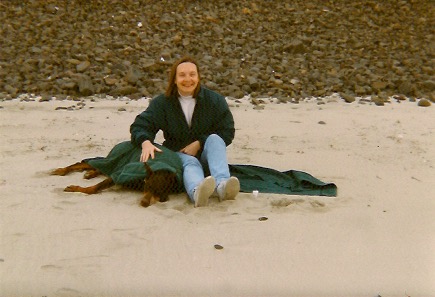 Saber had a restless night and when I took him outside he sometimes just stood in the dark yard breathing hard. A little before breakfast, after a productive pee, we came back inside. Saber walked toward one of my friends who was sleeping on a couch and collapsed on the floor. He was gone. My friend and I sat and sobbed, patting and kissing our still, furry friend. Then I walked into the bustling kitchen to share the news.

Friends gathered around for hugs, kneeling to say goodbye to Saber. And we began organizing how to best prepare his body for the long trip home. We carried his heavy weight to the deck and laid him on a tarp, placing ice around him before wrapping the tarp over his body. Then we went inside to feast and grieve and comfort. Occasionally one or two Saber fans would head back out to the deck to spend quiet moments with him.

A few of us took a Saber-less walk back to the beach before we left for the weekend. We sat in the sand near our spot from the day before, this time with tears, memories and broken hearts. Then I let out a whoop of laughter as I spotted a pile of dog poop nearby. I took it as a simple reminder from my boy, “Quit wasting time. Get up and chase some birds!”

The drive home was quicker with no need for Saber’s breaks, and my two passengers and I stopped to spend the night with Saber fans. We collected more hugs, added more ice to Saber’s wrap and once again feasted, this time on fresh oyster stew.

The next day I delivered Saber to a facility for cremation, and later brought his ashes home to Rosehedge. I returned to the Oregon beach spot a year later to remember my Saber, and, once again, laughter through tears, noticed another pile of poop. Thanks for everything, my furry Friend.

4 thoughts on “Lean on Me – DoberBuddy – Part Two”